Once again, I am delighted to welcome Ian Smith to my blog, this time to discuss a whole array of topics, from publication and writing to all manner of ‘behind-the-scenes’ goodies about Ian himself. And, I’m excited to say, He’s sharing a wonderfully amusing extract from his recently published novella in the Simply Players series, From the Top.

So, let’s get cracking, and throw you in at the deep end, Ian! How does it feel to be a published author? You’re traditionally published – why did you choose the traditional publication route?

In a way, it feels a little unreal! That’s probably because my novellas are all e-books and I’ve not had that many reviews to date. Perhaps if I saw one of my books in a bookshop, it would be different. But I must admit it’s rewarding to know that I’ve written three novellas which others thought were worth publishing, and that people have read and enjoyed my stories.

I wanted my first few books to be traditionally published, as they routinely handled the “not-writing” stuff like e-book formatting and downloading to retail sites, which would almost certainly cost me a lifetime of anxiety! It was really interesting working with their editors, too. I’ve found they’ve been really keen to help me tell my story as well as possible, and I’m really grateful for their constructive comments and support.

I definitely agree that a good editor is worth their weight in gold!

When writing, what do you find most challenging?

I thing I can find difficult is imagining how a character feels when I’ve put them into a situation I’ve not experienced myself. This can be pretty uncomfortable for me if it’s a primarily emotional crisis, but I hope I can show my readers enough for it to seem plausible.

Action scenes can be tricky, too. I want to include enough detail for a reader to imagine the scene, but not so much that it slows their reading pace. If something happens quickly in “story time”, I want it to move pretty quickly for the reader too.

Yes, empathy and pacing can be an authorial minefield, but I think you do a brilliant job of both!

So, tell me, what do you have in mind for your next writing project?

Here’s a question for you, knowing that I invariably start at the end of my stories and attempt to get my characters to that point(!), and knowing that you don’t do this as a rule. Do your stories ever seem to veer off in an unexpected direction?

Yes, I’ve a half-written novel which temporarily stalled when two of the characters did something I’d not expected. I put it to one side so my unconscious could work on it, and now think that this incident could be an asset to the story. I’ll return to it later this year and see where it wants to go.

That sounds intriguing. I look forward to hearing more about that!

How about some non-writerly questions? Not that I want to throw you awkward questions, or anything… Can you give five things off your “bucket list”, whether ones you’ve done or want to do?

If you could go anywhere in the world, but had to drop everything and go right now, where would you go? What pulls you there?

Iceland. It’s what I’ve seen and read about the country as a whole which appeals to me, the volcanoes, glaciers, hot springs, amazing landscape, the huge waterfall, the chance to go whale-watching.

Good choice! I’d love to go there, too.

If you could pick a past life, what time period would appeal to you and why? Would you be male or female? Rich or poor?

Well, I’ve learned a bit too much history to think that there was ever a “golden age” for mankind. It’s only really been in the last few decades we’ve not been likely to die young from famine, unpleasant diseases, or a problematic birth, and then only really in the developed world. To be realistic, the rich have always had the more comfortable life, and for most of history, men held most of the power and authority. But being rich, powerful and healthy, whether as a man or woman, at an interesting time and place in history has a certain appeal.

If you had a superpower, what would it be?

To “see through” all the fog people create around them and see the truth they’re hiding.

Mmm, I love that answer!

Right, I can’t wait any longer. Tell me about your new novella. What’s From the Top all about?

They want to keep their developing three-way relationship private, while surrounded by people who love to gossip and just might let things slip to the media. Time is tight, working with a professional stunt team and egotistical actors is stressful, and Paul and Becky get some unwanted attention.

Adding to his anxiety is the important question of where their relationship can go.

Then there are his terrifying, painfully realistic, and very life-like dreams about nasty accidents. On TV, he can have another take. Real life only gives him one go. But it’s almost as if he’s getting a chance to change how things work out.

Wow! I’m absolutely fascinated. I’ve got my copy and I can’t wait to read it. I also know that you have an extract available, which I loved the first time I read it. Will you please share?

Becky and Hayley are staying with Paul, and they’re having a day out with his nephew and niece. Paul’s brother-in-law is a police officer:

I bent over and spotted the animal, almost hidden under an overhanging piece of rock. “Well spotted,” I said.

We admired some anemones, then went on to look at the next pool. We were exploring the beach near a lovely old fishing port on a day out. We’d pottered around for an hour or so, and were now on our way back to the town before the tide came back in.

A few yards away, my niece Vicky chatted away with Becky and Hayley. “Is Uncle Paul going to marry both of you?” Four-year-olds can ask squirmingly blunt questions in total innocence.

“Dunno,” Becky said, glancing at me. “He’s not asked either of us yet.”

“Do you know anyone who has married two people at the same time?” Hayley asked.

Vicky thought for a second. “Don’t think so.” She looked at me. “Uncle Paul, are you going to ask them?”

“I can’t marry both of them, it’s against the law,” I said, trying to sound serious.

“You mean Daddy would have to put you in prison?”

“Maybe you could be married to Becky one day, Hayley the next?” Daniel suggested.

The women smiled at each other. “Not a bad idea,” Hayley said. “That way we wouldn’t wear him out.”

He turned to me. “How could they wear you out? You’re strong.”

I glanced at my girlfriends, who both smirked. Hayley raised an eyebrow in a “get out of that” gesture.

Shit, what can I say? I’d had some practice at dealing with Daniel’s questions over the years, but this one had me stumped.

“Daddy said Mummy was wearing him out the other day,” Vicky said.

I made a mental note to treat Vicky to a huge ice cream back in town. “It’s all the odd jobs,” I said. “Putting up shelves, fixing things, gardening, shopping, and cooking. It’s exhausting.”

Daniel was thoughtful for a few seconds. “Well, maybe you could ask Daddy to help. He likes fixing things.”

“But Daddy’s busy fixing things for Mummy,” Vicky said. “And Uncle Paul often has to help him anyway.”

“Why’s that?” Hayley asked, her face a picture of friendly curiosity.

“Daddy gets in a mood and says rude words,” Daniel said, sounding very serious. “Mummy tells him off, then gets me to fetch Uncle Paul to help.”

Becky turned away and I saw her shoulders shake. Hayley struggled not to laugh too.

“But your Daddy works hard and gets tired,” I said. “And he’s very good at fixing things.”

“Maybe we should just carry on being Uncle Paul’s friends for now,” Becky suggested, wiping her eyes.

“Good idea,” Vicky said firmly. “That’s not against the law, is it?”

I looked at Becky and Hayley, who were both smirking at me again. Time to change the subject. “Everyone ready for lunch?”

Brilliant! Like I said – I love it! I know I’ve said it before, but Paul is such an endearing character. Where is From the Top available? I know it’s available in more places than Amazon.

Yes, sure. It’s available from:

Would you just give a reminder of how From the Top fits in to the series as a whole, and where we can find the first two books in the series?

I was delighted to have ten 4 and 5 star reviews posted on Amazon for Knights Errant and six for The King’s Captain. The best thing about this was knowing that these readers enjoyed my stories enough to post reviews, and I was flattered by their complimentary comments. 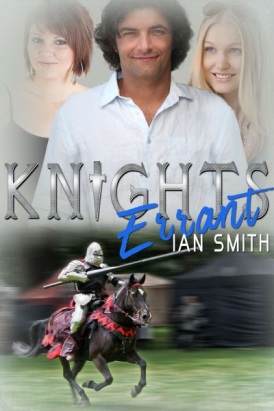 Great, thanks! So, is there anything else about you or your work that you want to reveal? Your biographies are always really entertaining.

My education and professional life have been heavily focused on science, but I have this endearing day-dream that writing might become more than a creative hobby.

I think writing fiction is a sort of safety-valve for my slightly hyperactive imagination, or maybe it just lets my inner alter-egos to go out and play nicely? I like to try writing stories which are at least plausible, especially in the little details. So I do the odd bit research, which might result in me doing something entertainingly silly to get experiences, which is an added bonus. Recently, I’ve been introduced to the traditional British rural skills of dry-stone walling and hedge-laying, I spent a day getting a very basic introduction to bushcraft. I’ve spent the night in a snow-cave in the Cairngorms, one I dug myself. I’ve flown in a hot air balloon, gliders and had flying lessons and an aerobatic session in light aircraft. And I’ve taken up archery, using a traditional bow.

I’ve given talks at a general-interest level on different topics which caught my interest. The first one was on death and mortuary practices, which went down surprisingly well with the largely-retired audience. Apparently I answered a lot of questions they’d wondered about, but didn’t know who to ask!

Oh wow! Your research is so hands-on! You put my dodgy Google searches to shame…! And I wish I’d been at that talk. That’s right up my street!

An easy question to end with: Where can you be found on social media?

I can be found on any of the following:

As always, it’s been a real pleasure hosting you on my blog, Ian. I look forward to talking to you again – next time maybe about Book 4…