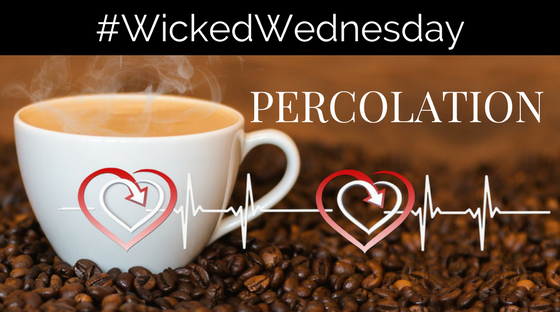 Flash fiction isn’t something I write very often, but I hope you like this little piece of sexiness for #WickedWednesday’s Coffee prompt, inspired by a rather lovely conversation over breakfast recently.

“How long does it take? I don’t know much about percolators. I have instant at home.” She caught sight of the gentle roll of the eyes and the smile he tried to hide as he got back in bed. There were so many little quirks that they still needed to learn about each other.

He raised an eyebrow at the t-shirt she’d swiped and thrust over her head while he’d been out of the room.

“It’s chilly this morning,” she shrugged.

He rolled onto his back, staring at the ceiling. “Well, percolating takes some time. There’s all the bean grinding, and the slow drip, drip until it’s sitting there, hot, wet and waiting.”

“Is that right?” Taking his hand, she slid it up inside the t-shirt, shuddering as his fingers found her peaked nipples. He made a funny little noise as she flipped herself onto his torso, rotating her pussy against his lower belly. “Something like this…?” Her lips lowered to his chest. Butterfly kisses, travelling over his pectoral muscles to his neck; murmurs of “takes a while…mmm” wisping up to his ear before her lips found his.

“You taste so good,” he moaned as she rotated her burning ache a little lower, lifting a little from his body until she could feel the tip of his solid, thick cock against her folds. She reached between her legs and slid him up so she could see his glistening slit, the length of his cock and her hard little bean pressed together. He bit her lip. She probed him with her tongue.

Twitching, he tried to flip her body high enough to thrust himself straight inside her. She was drenched; it would have been easy. His face had flushed, perspiration building a little on his forehead, his fingers raking at her back.

Without warning, she slid down his body, her face level with his erect, needy cock. Her mouth open, willing, as her eyes met his smouldering gaze, she drew him in, letting his desire simmer in her mouth as she felt the drip, drip of his arousal on her tongue. Working him harder, more vigorously, mouth was joined by hand, bringing him almost to the boil. His breath filled the air, rasping, erratic, overwhelming the slurp of her mouth around his girth. But boiling wasn’t on the menu.

Sliding her tongue down the length of his shaft, pausing to draw in more of the glorious, sticky pre-cum as she rolled her tongue over his slick cockhead, she drew her mouth away, flicking at his balls with her tongue tip, before kissing down the inside of his right thigh. He reached down and tried to grasp her arms to haul her back onto his body, but she gave him the slip, inhaling like an old whistling kettle and tut-tutting as he sat bolt upright and attempted to grab her once more. But she was already out of the sheets, eyeing his expression that was overflowing with steamy lust as she rolled off the end of the bed.

She left him hot, wet and waiting, skipping out of the room with a smile she didn’t even attempt to hide. “I’m going to get the coffee. Want it filling to the brim, darling?” She grinned as she heard the growl from the bed.

She was back in an instant. “Now, what do you fancy for breakfast?”

Other #WickedWednesday posts on the blog